I am asked this question regularly.   And the better answer is not “Where on Earth” but more “Where Not On Earth” did she come from? Her name IS “Cosmic” Kitty after all. <grin> But to be completely honest, she did not even have a name until July of 2015.   She was a sketch, a doodle, something I had been drawing since I was seven. So how does a doodle become a character?

As little girls, we love to draw hearts and flowers all over the pages of our notebooks and sketchbooks.   I was no exception. And as I would draw hearts, I started adding more than the usual dots and arrows. I started to add whiskers, curly hair, freckles, big eyes, tendrils, and even bodies and clothes. I began to create heart shaped beings out of my doodles. I also loved to draw flowers. I began to draw mountains around my flowers, a sun coming up in the morning or even a moon in the evening. I would create vast lands (now called Joy-Ville), all starting with a few flowers. As I got older, these drawings fell away, replaced by horses (real and drawn). Eventually, my doodles became occasional swirls and spirals on a notebook page in class or, later on, during a meeting. The heart shaped characters, and the land of the flowers was forgotten.

Then one day, in my early 40s, I was sitting in a boring meeting. I don’t even recall the topic. But from nowhere, a heart shaped doodle came out. And through muscle memory from my childhood, I added eyes, eyelashes, whiskers, curly hair and freckles. I smiled with nostalgia at what I had drawn and did not think much more about it. I did, however, pull out my old sketch pad one weekend and penciled a few of the old characters and scenes just for fun. I put it away again, feeling complete that I had relived some childhood memory.

Then, in July of 2015, I attended this amazing retreat called Soul Sensuality taught by Julie Stuart. We were located at Elohee on the top of a mountain, painting in a round room for five days. I had never done intuitive painting, and it was fabulous! The first day I stepped up to the almost 4-foot piece of paper on a huge board, I knew exactly what needed to be drawn. A big heart – turned into a head. My little heart shaped figure demanded to be seen, and this time, in full color! Over a day and a half, I painted my heart out (no pun intended but true all the same) and even had to add more paper as new dimensions came forth. Intuitive painting is not meant to be put on display as it’s a highly personal journey of discovery.   However, I have included the photo of my finished art here for your reference. 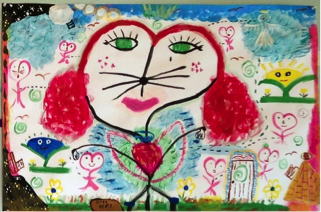 As I painted my little heart being with her colorful aura and lapis necklace, we were also working with personal archetypes in this workshop as well. In simple terms, an archetype is a part of your personality which serves a specific purpose. It is usually a collective pattern we can see in society – think individual psyches such as the hero, the villain, the sage, the saboteur, etc… However, we also have parts of our personality which are unique to us as well. For example, one part of mine that I discovered (and named) is the “Queen of Luxurious Muses.” There is a part of me that loves beautiful art, excellent food presented just so, fine wine, great performance and theater, and generally likes to be pampered. I’ll take a spa day over a sporting event ANYTIME.

I share all of this because Cosmic Kitty’s name came from another archetype that came out during that 5-day workshop. I called this archetype the “Seeker of Cosmic Truth and Expansion.”   Fun, huh? And a mouth full! In basic terms, it is the part of me that loves the metaphysical stuff, wants to know what happens after death, knows we are all connected, talks to Angels, and hopes we can meet up with some friendly E.T.s one day. As you can imagine, that is the part of me where Cosmic Kitty was born. She is the embodiment of my “Cosmic Seeker,” but choosing to understand the world through the eyes of the fifth dimension and Love versus the negativity and cynicism we often hold today. Her name came out during that workshop and has stuck ever since.

After the workshop, her story began to come down quickly. It still took me a while to do the work and there were many other factors I won’t go into here. But the short version is that she represents a part of me who understands we are all connected, on a Cosmic level.

As you think about your life purpose, reflect on how small things in your life may have opened you up to larger aspects of who you are.